The following so-called “stages” are hypothetical and based purely on observation of own experiences, behavior and reports of other Fapstronauts.
The time periods mentioned are rough estimates, and do not refer to your current NoFap streak, but to the maximum streak you have achieved, as well as the average streaks you have. There is no guarantee that the techniques for progress and preventing relapses will work at all times. Please also remember that you are not forced to implement these; they are merely suggestions.

1. Dilettantism (appr. 0-15 days)
When just starting NoFap, the dilettante is positive and expectant of results. He maintains the attitude to “just go for it”, and is likely to relapse within the first two weeks, as he did not prepare for upcoming urges. The dilettante lacks experience in resisting urges, and is mostly not very disciplined. Without knowing how to react in critical situations, he may try to violently resist his notions, but will crack within a short period of time, going back to the behavior he is used to. The dilettante may experience slight effects, which make a huge impression on him. If these effects do not occur, it may happen that he gives up entirely.

As a dilettante, it is important to be aware of the fact that you are not prepared. Caution and awareness is extremely important; when strong urges arise, you should pay close attention to the circumstances you are in, and immediately seek help from more experienced Fapstronauts. If you get no immediate response to your request for help (which will happen quite often), search the /r/NoFap database for posts that respond to your situation. You must remember that you are not exceptionally important to others, and as a beginner, the learning process is very contingent on yourself. Don’t think that knowledge will be served to you on a silver platter, make observations and try to learn from these.

When you as a more experienced fapstronaut are helping a dilettante, try to avoid using vocabulary such as “simply”, “just”, or “not hard”. Some things may be evident to you when you are experienced, for the dilettante however, these are totally new things that he has to experience himself first. If a dilettante relapses, try to give him encouragement, and honor his achievements so far.

2. The Void (appr. 15-25 days)
This stage is called the void because it is hard to determine what will happen during this time. In the void, the prospective fapstronaut may still cling to desperately to dilettantism (a stage you actually never really leave, in my opinion), or may have already advanced into the next stage. In the void, it is likely to happen that the fapstronaut looks back upon the from his point of view long time he has gone without relapsing. Mind tricks and brain fog are common issues he has to deal with.

This can be solved by practicing rational thinking. Try to get away from daydreaming, and focus on what is actually there. I would counsel against meditation during this time, as brain fog may trick you into using the relaxation for relapsing, replacing the meditation process for the relapse-process. Meditation is normally done in spare moments, and as you are used to using spare moments for relapsing, you will easily fall back. Additionally, try to get a healthy amount of sleep (not too much!), and spend as little time as possible at the computer. Try to ban music(music that contains sexual references) completely from your daily routine unless somebody else you are communicating with (texts do not count!) is near you. Apart from that, try to figure out in which of the other stages you are closest to, and practice a few of the precautions meant for them too.

3. Puberty (25-60 days and longer)
In puberty the fapstronaut is basically the same as a teenager in real life. He is experiencing many of the normally reported benefits, and is noticing some that are specific to him as well. He is constantly discovering new methods of improving his life, and makes himself a routine that is strictly followed. Discipline is at an all time high, and feeling of invincibility arise. The thing about puberty is that this feeling of invincibility can surprisedly change into the opposite. This common occurrence is also known as flat-lining, and may continue for about two weeks. It is possible that more than one flat-line occurs, and that there are only a few days between these. In general though, puberty is a stage of immense growth. The fapstronaut will make most of his experiences in this time, and develop many defense strategies, some efficient, some not. Relapsing during this time is a relatively large throwback, as it can destroy ideas and prolong flat-lining.

Therefore, it is especially important to avoid binging after a relapse in this stage. Binging will throw you back to the very start, as you do not have strategies to get back to your previous state. To avoid a relapse, you should try to stay realistic and avoid being haughty. The strategies you have figured out for yourself should be preserved, as only you know what works for you, and what not. Enhanced accountability is a powerful weapon against urges, as it may catapult you into the next stage. However, with flat-lines reoccurring every once in a while, puberty can continue all the way through the next stage.

4. Welcome To The Machine (appr. 60-90 days)
From my experience this is the most relaxing stage you will encounter on your journey except for those going far into the future. In Welcome To The Machine, the fapstronaut functions like a machine – flawlessly. Urges are mostly held at bay, and the approximating 90 day mark gives him new motivation and determination not to relapse. Benefits are constantly experienced, and coming out of flat-lining, everything feels a bit nicer for the fapstronaut. Life is going upwards. The fapstronaut experiences a confidence boost and is harder to unbalance. He has effectively tested methods against sudden urges and has developed his own strategy.

As a fapstronaut in Welcome To The Machine, there isn’t much that will harm you. However, if something totally unnerving does happen, you should try to remember your principles: Why you are doing this, and what you have built over the course of the last two to three months. Access your fundament and rely on it.

5. The Great Salt Desert (90-365? Days)
So why is this stage called The Great Salt Desert, even though it begins at 90 days? Shouldn’t this be the stage called “Freedom”, or “Paradise”? Well… no. It doesn’t end at 90 days; 90 days is just a way mark, an achievement, but not more. This stage is called The Great Salt Desert because it is the longest so far. Seemingly endless, it is the second last stage. This stage is also called The Great Salt Desert because it is empty. The fapstronaut who reaches this place is overall happy; the thing is: Benefits are getting extremely rare. The fapstronaut has experienced most of the common benefits, has gotten used to them and is waiting for something bigger. Except that won’t come. This stage is like a saturation curve; the closer you get to your goal, the slower you go. Not noticing benefits anymore, the fapstronaut may lose his determination. His brain slowly tricks him into thinking that he is finished and can go back to his old behavior, practicing it in healthy amounts. This may lead to a relapse.

Relapses in this stage are practically harmless. Your achievements of the last 4 months won’t suddenly disappear. It is vital to not trick yourself into relapsing over and over though. As if that happens, you may fall back into your old behavior. The trick to gaining benefits in this stage is slightly different to the other stages. Previously, you worked on yourself in ways of creating new habits, and getting disciplined. Now, you should try to go out of your comfort zone as often as possible. Over time, our brain tries to build ourselves a nice and comfortable spot to stay in – metaphorically. This lies in our human nature, and we can prevent this by leaving our comfort zone as often as possible. Discomfort is a sign of growth, or rather: Discomfort forces you to grow.

6. The Happy Hunting Grounds (appr. 365?days)
This stage is the last stage I would like to define. As I have personally never reached this stage, I cannot determine whether there are more, and what lies here is only what I assume lies here.

The Happy Hunting Grounds are the end (is there really an end?) of your journey. Urges aren’t really there anymore and relapses occur only out of curiosity, whereupon the fapstronaut will notice that he actually does not even want to relapse.

My tip to prevent relapses here (even though you probably won’t need it): Compare who you used to be with you are right now. That should kill the urges for good. If not, you have your own tactics.

How to determine which stage you are in
From reading the texts above, you may have already figured out in which stage you are. If not, don’t worry. As I said earlier, these are purely hypothetical. It may happen that your journey is totally different from the stages. Also, it really depends on the person concerning when each stage sets in. If you’re doing NoFap for fun, you might be in stage 3 after a week, if you’re doing NoFap because you have serious problems, it might take you double the time to reach stage 3 than originally stated. 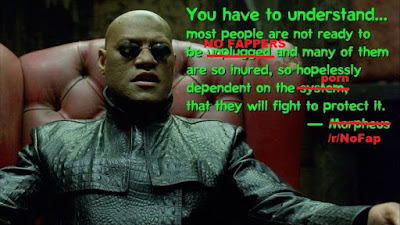 1 thought on “Stages Of NoFap Reboot”